The Phoenix group gave on September 29 its only and unique concert in France at the AccorHotels Arena in Paris. A highly anticipated live by the French electronic music and pop rock band, awarded with a Grammy Award for Best Independent Album.
As a tour provider, S Group strives to technically perfect an innovative scenography designed by Pierre Claude, light designer and console operator for the entire international tour, which, following the advice of Léon van Empel, CEO of S Group, has discovered and adopted the new Star Star StrongLite HD stroboscopes.
"At the first briefing with the artists about the light design, I first realized that the project was going to be complicated. The idea was to play on a huge video floor of 11m x 9m reflected by a mirror of 11m x 10m itself inclined at 45 °. The light had to be discreet and out of the question to hang on or use the festival bridges hidden by this gigantic backdrop.
My choice for stroboscopes was then turned to a classic model.
At the time I was not convinced by what was done in LED; some did not have enough power, dimmer curves and colors were approximate, there was no random, they were too heavy and unsightly ... With a group of this size, we play as much in clubs only in the biggest festivals of the world like headliner: the power must follow.
During the tour in Asia (without our kit), I was forced to use LED strobes, which allowed me to question my choice. I then asked my friend Leon van Empel what he had to offer me. He recommended me some Stronglite HD from Starway, a brand I did not know much about, but everything seemed to be on the technical sheet.
I give full confidence to the choices and proposals of S Group, we then did the test on the next date (a few days before Paris). I was immediately charmed. The machines are discreet with incredible power, the dimmer and the colors are fine, and my technicians are delighted. We have in all 5 Stronglite HD against the light of the mirror, 5 against the light, and 8 in the side.
Perfect for an Arena! I leave so confident for the big festivals", Pierre Claude, light designer.
Starway, HD brand.
DÉCOUVREZ AUSSI 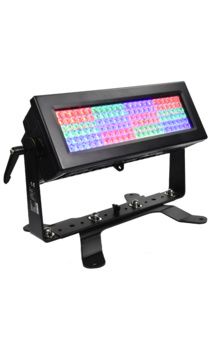